From unknown tech entrepreneur to Governor in 18 months.

In 2009, Michigan was nearing the end of the Jennifer Granholm and political observers speculated that the 2010 elections would be favorable to Republicans in Michigan. With those dynamics, several established Republican candidates--each with statewide political and finance infrastructures--were clamoring to run for Governor.

So when a then-unknown tech entrepreneur from Ann Arbor announced his intention to run, too, most people scratched their heads.

This man, of course, is Rick Snyder, who would go on to become Michigan's 48th Governor.

That spring, Rick declared his candidacy and quickly assembled an inner circle campaign team. CRG was among the first five hires and we're proud that we were truly part of his team from day one.

CRG was retained to manage the west Michigan finance efforts. Specifically, this meant introducing Rick to a donor community who was already fiercely supportive of its hometown candidate, Congressman Pete Hoekstra. This was no small task, as Pete had been a popular and respected office-holder for over a decade. We had advised Rep. Hoekstra in his previous Congressional efforts and knew how much support he held in the region.

We started by introducing Rick to area's top political stakeholders, giving Rick the opportunity to tell his story. His message of re-invention and a business  approach to government resonated strongly, but skepticism lingered as he was polling at 3% in the crowded primary field.

But we persisted. In the short-term, we were able to effectively neutralize the regional donor base from committing to other candidates, and once Rick's polling started to tick up fundraising increased exponentially, especially in western Michigan.

As the primary cycle progressed, CRG's role was elevated to manage the entire statewide finance department and oversee all fundraising. Rick narrowly won the heated primary and cruised to victory in the general election. Total fundraising exceeded $6 million, all from individual donors as Rick does not accept PAC funds.

Under Governor Snyder's leadership, Michigan's economy made monumental improvements. A state that was once at the bottom less than a decade ago is now steaming to the head of the pack in many key economic metrics. CRG is truly proud of the role we played to elect Rick Snyder and re-invent Michigan. 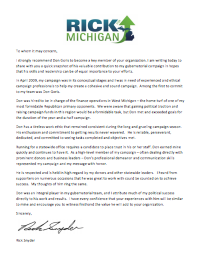